As I sit and write this, it’s another cloudy, grey day in Pittsburgh.  There’s something about cloud cover that can bring me down.  Not the fluffy, white cotton balls that dot the blue sky and spark imagination on a sunny day. It’s the monotone, grey blanket that shrouds the pretty blue, stifles possibilities, and can accentuate discouragement.

Though I can be Discouragement’s pal every now and then, I know that it is not something that God wants for us.  Just doing a quick word search in my Bible, I found 19 references to God directing his mighty men and women to NOT be discouraged.  There are even more references to God telling them to be courageous, to have courage.  Having courage does not only mean to be brave, but also means having determination and strength of spirit, confidence.  It means to be encouraged.

I love to be around people who are encouragers.  They speak life. They impart courage to step out into our destiny.  They kindle a spark of hope that ignites a forgotten dream.  They bring blue skies and scatter the cloud cover.

My husband, Bruce, was an encourager.  It was a genuine gift he gave to others.  When he embraced this gift, he flourished, and so did those around him.  Many years ago, he had taken one of those personality tests that tells what Biblical character you most resemble.  He was honestly depressed because he wanted to be Joshua, a great leader and mighty warrior.

Barnabas’ given name was Joseph, who lived around the same time as Jesus. His friends gave him the handle, Barnabas, which means “son of encouragement”.  It was a complement, of course, and Barnabas was a key player in the early church.

Bruce took the test again, several months later, maybe hoping that he might get a different result, and be Caleb, or David. He was still Barnabas. I’m very glad about that, and ultimately he was, too, and seized his destiny.  I still hear often from people who were blessed in unique ways by his encouragement.

There sure are enough things around us to bring us down. 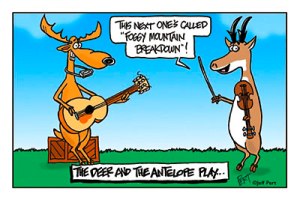 Let’s take the
counsel from the Old Testament and breathe courage into one another and whoosh that cloud cover away. That doesn’t require false complements or pie-in-the-sky hope. Just the effort to look for good things instead of bad.

It’s not coincidence that so many songs bemoan the grey skies, yet delight when those blue skies are smilin’ at me.

I read a book many years ago (Hide or Seek, James Dobson) that spoke of the importance of purposefully and consistently building our children’s self-esteem and confidence with our words and actions.

One thought on “And The Skies Are Not Cloudy All Day”